After almost 3 months of no strange activity in Bucks County, and just as I was getting ready to return to my life back in California, something else happened. Another animal massacre took place last night. I saw the coverage of it on the news this morning and recognized the M.O. immediately. Six animals were mutilated under a full moon but every news channel was reporting that it was just an animal attack. I went to the crime scene and it left me with more questions than answers. The police were quick to dismiss me when they learned I was trying to get the story and there were no other reporters on the scene. I immediately felt like something was off. This town is small and close-knit. I’ve known nearly every resident since the time I was a kid and yet, I didn’t know the officer I spoke to. He told me he was from out of town and was just called in on this case. I asked him why they would call him in for an animal attack and he got angry with me and told me to vacate the premises. I told him I wouldn’t leave until I could talk to Mr. Sellers, the man who owned the farm, to get his side of the story.

This is where it gets weird. The officer told me that Mr. Sellers had left early this morning after calling the police to go stay with family out of town. Immediately, alarm bells went off in my mind. Mr. Sellers had lived on this farm for as long as I can remember. When I was 15, his wife passed away and I remember my mother telling me she was the only family he had left. Not only that, Mr. Sellers is a man who wouldn’t hesitate to warn troublesome teens to stay off of his farm unless they wanted to witness him make use of his second amendment rights. As a teen, even I was the victim of some of his crazy tirades for simply loitering outside the local 7/11. It didn’t make sense to me that he would just up and leave the rest of his animals unattended and half of his field unharvested. The more questions I asked, the angrier the officer got until I was forced to leave the farm.

I got in my car and tried to drive into town to talk to some residents, but every road into town was closed off due to construction, yet I didn’t see a single construction worker. As I drove around, attempting to find another way into town, I noticed I hadn’t seen a single car on the road all day. It was eerily quiet. More than normal for the rural area.

My head was swimming with questions as I drove home. Where had Mr. Sellers gone? Was this really sacrificial cult work? Was it related to Mr. Skinn? Why was the news reporting that it was an animal attack? Where the hell is everyone?

As I pulled into my driveway, before turning off the car, the radio switched on at full volume and an ear piercing SCREECH came out. I slammed on the buttons trying to turn the volume down with no luck, the radio seemed to have a mind of its own. Just as it felt like my ear drums were going to burst, the sound stopped, and a song started to play through the static:

Just as quickly as it had begun, the sound stopped. In my rush to get out of the car and into the house, I nearly tripped over today’s newspaper on the front step. 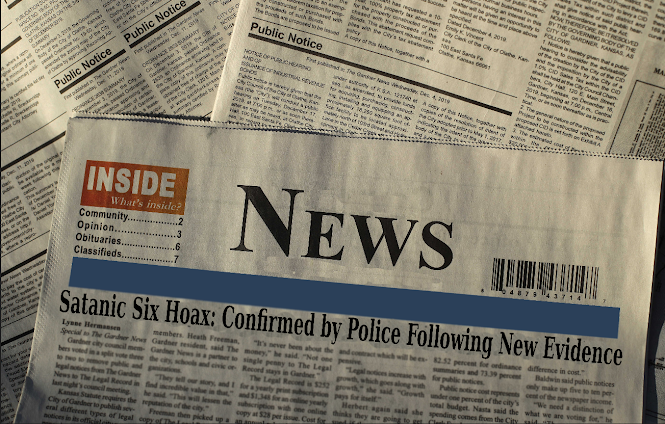 at June 27, 2021
Email ThisBlogThis!Share to TwitterShare to FacebookShare to Pinterest

I’ve had no service or internet all day. I don’t even know if I’ll be able to upload this entry, but I have to write down what’s happened to...